Okay get that picture out of your head I didn’t flash anyone my naked body, at least not to any strangers (insert wink emoji here). However, I did participate in a flash mob for the first time.

When flash mobs started, I remember thinking how cool is that! To think that you could be minding your own business at the mall and all of a sudden people come out of the crowd and perform some dance routine. I wanted to be in one of those. And this past Sunday I did just that.

How do you get to participate in a flash mob you ask? Well, you could belong to a dance group that is asked to perform one, or do what I did — search this thing called the Internet. My research led me to a company called Flash Mob America that organizes flash mobs all over the United States. You sign up for free and find flash mobs that fit into your schedule. There was one on the list that was a marriage proposal in Anaheim on a Sunday morning. Fits my schedule and it was romantic. That was my choice.

Since it was in Anaheim, my sisters were able to join me on this adventure. We’re each in a different county now: me, the oldest, in San Diego; Liza, the middle, in Orange; and Roselma, the youngest, in Los Angeles. All in SoCal, and meeting up in Anaheim where we grew up.

About a week before the event, we’re sent an email with rehearsal information and a YouTube link to show us the dance we will be performing to the song Buttercup. Then we’re sent another super secret email with details for a super secret rehearsal the night before and a YouTube link to dance steps for the song Marry Me. You see, the girl being proposed to is also participating in the flash mob. The first email was sent as a decoy to keep her from realizing she’s the one. All this super secret stuff, who would have thought it would be so secretive. I guess it has to be secret, that’s why it’s a flash mob, duh.

Well, I looked at the YouTube videos and the steps looked easy enough, so did I practice – maybe once or twice while holding my phone while trying to keep up on YouTube. Not the best dance practice methods. But I do have full-length closet mirrors in my bedroom, and I had some dance experience in high school and helped choreograph routines for our drill team half-time shows. Oh, and there was that time us moms did a dance routine for a school talent show and our choreographer and instructor was Cheyenne Kibblewhite, the new Executive Director at San Diego’s Culture Shock Dance Studio – that counts, right? Is Zumba considered dancing? Okay, so it’s been awhile since I’ve danced. You really don’t need to be a super dancer to participate. A willingness to learn and a desire to help is all it takes.

Ehh, we’re going to two rehearsals we’ll be fine. So after watching a baseball game for one son, and a basketball game for another, I head on up to Anaheim to meet my sisters for the Saturday super secret rehearsal. It seems none of us has really practiced. Of course we’re late, and the instructors have begun. We stand in back and try to catch on. There will be a dance group performing a routine in between our parts, so we really don’t have to dance as much as we thought. Well, that’s good. No problem, we got this.

Afterwards, us sisters have an excellent seafood dinner at a new restaurant in Old Town Orange called Ways & Means. (If you have Instagram, you can see all the food pictures I posted.) Later, for inspiration, we watch Step Up Revolution. It’s the 4th movie in the Step Up series and is based around a group performing flash mobs. And if you like those type of dance movies, bypass the acting and concentrate on the flash mob performances. Personally, I looked at the routines as art in motion – the choreography, set design, sense of purpose was masterful. Watch it, because it’s hard to describe the art gallery scene where art is transformed into dance. And I especially like how their timing and locations of their flash mobs were designed to send a political message. I consider that a peaceful protest.

In the wee hours of the morning, when it’s still dark outside, we have the not so secret rehearsal at 6:00am – yes am. We figure out who the bride to be is and we run through all the steps of the Buttercup routine, although everyone knows full well that we only dance through the first chorus. I practice that torso thrust S-curve like movement…my sisters laugh.

The instructors announce the official location and general timeframe of the flash mob (although we found out the secret location the night before at the super secret rehearsal) — the stage at the Tinker Bell Half-Marathon at Disneyland. Woohoo – we’re going to the happiest place on earth to help make a couple happy! Too bad free tickets weren’t included, that would have really made me happy – have you seen the price of Disneyland tickets these days!

Now comes the hardest part…waiting. Once we get into the stage area, we end up waiting around for a good hour and a half until there’s a break in the stage entertainment, and when most of the runners have completed the race. We try to blend in, looking like the throngs of supporters cheering on family and friends. We should have grabbed a few of those thermal blankets and looked like we ran the race, or wore some green Tinker Bell outfits with wings (maybe the half-marathon will be a future week…or not). We walk around, and walk around, use the porta potties, witness three other marriage proposals, walk around some more, listen to the military rock band…and then we notice that many of the other flash mobbers are starting to come towards the stage. 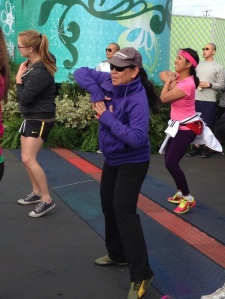 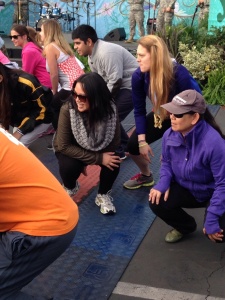 Okay first, the fake marriage proposal (to throw off the future bride even more) happens on stage, then Buttercup starts playing, our cue to head to the middle. So we go in and start the dance no problem…then the deception…the groom-to-be pulls aside the bride-to-be and dances to her along with the dance group to the song Treasure…then the whole group comes back in for the finale of Marry Me and opens up their hands to reveal Ring Pops (the groom-to-be had a real ring)…and it’s over…she says…wait, I can’t hear her…YES!

Ohhhh, it’s all so romantic (although personally, guys listen up, I would prefer a romantic vacation on some tropical isle). Is that it? Are we done? What do we do now? It was hard to leave. You practice the steps over and over again and again, and all those logistics the organizers handled to keep it super secret. It was somewhat anti-climactic. Most of the flash mobbers hang around, take a group picture, and congratulated the happy couple.

Well, I guess we’ll go out to breakfast.

Although the actual flash mob performance went by way too quick, the memory of it will last a lifetime. Primarily for the couple, who you wish will live happily ever after. It’s got to right? It started at the happiest place on earth. But also everyone who participated will be sharing a memory with each other — complete strangers, and who today wouldn’t recognize most of the other flash mobbers. The beauty of a flash mob is the fact that total strangers came together, volunteered their time, went to a super secret rehearsal and another one at the wee hours of the morning, to create such a lovely memory for this couple.

Although not at the same scale, it’s like when many San Francisco residents came out to help fulfil a Make-A-Wish dream come true for “Batkid.” Complete strangers coming together for the greater good. The greater good of bringing a smile to someone’s face and creating special memories. There is hope for all mankind afterall…and yes, I plan to continue to be a flasher…where are those Culture Shock gift certificates, I need to step up my dance moves.

http://www.FlashMobAmerica.com – no cost to get on their mailing list, flash mobs are organized all around the country – go be a flasher! (If the flash mob is posted on YouTube, I will update this post with a link.)