Inspiration comes in many forms. I wanted to do something this week to commemorate the Winter Olympics. When I saw the funky outfits being worn by the Norwegian Curling team, I was inspired that curling would be the sport to honor.

Curling didn’t look that hard. It seemed like bocce ball or shuffleboard on ice, from what I recall from four years ago. I can do that. And with the help of that Google thing, I found out that Curl San Diego was just starting some beginner classes this very same weekend — what luck!

Better yet, my younger son Grant actually wanted to go too, and he brought along a few friends: Jacob, Nick, Jason and Ricky. Jacob’s mom, and my friend Heidi, plus Lacy (would she be considered an adult or a kid?) and I made up our nice rounded number of eight for beginner curling.

The funny thing with Lacy is that when I mentioned curling to her, she said it was a dream of hers to be an Olympic Curler. Huh, really…she did grow up in Oklahoma. Well, it’s always a bonus to help others pursue their own dreams. I just think it’s cool to combine fashion and sport.

Once we get to the Escondido Ice Plex in North San Diego County, we fill out all the necessary waivers, and the group of beginners, about 50 of us, anxiously wait for the lessons to start. While we’re standing around, I notice a curling stone atop a stack of flyers, so I pick it up and wonder “wow, that’s really light!” They reply that the stone is an empty display and the ones we will use are actually 42 pounds. What! 42 pounds are you kidding me? I guess we never actually pick it up, we slide it along. For some reason, I don’t remember all the details from the previous Olympics. Why was I thinking curling would be something like bowling where you pick it up and aim it down the lane? Are there bumper guards for beginners? No. Hmm. I should have watched that intro video on the Curl San Diego website.

We soon are corralled into a corner and receive rules instruction. Besides safety rules to prevent falling like don’t run, don’t pick up the stone, don’t walk backwards when sweeping, they point out the very important tradition about the winning team buying the losing team the first round of drinks…although probably not applied to our mostly minor-aged group. The game was invented in Scotland…those Scots. 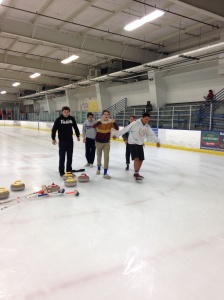 Soon we are headed to the ice. I totally expect to start falling immediately, but amazingly I stay upright, and in fact I did not fall the entire night. (I can’t say the same for others in the group.) The group of boys run off claiming the back corner lane area, playing with the brooms, trying to move the stones and generally sliding around the ice. Man, who are these kids, where is their supervision…oh that’s me…I immediately feel like back in the elementary school days of my kids, chaperoning students on a field trip. I am already worried that one of the kids will fall and get a concussion. Oh geez, there’s a basketball tournament the next day and if they lose I know it will be my fault. What have I done!

Okay, calm down, Brian, the president of Curl San Diego, is headed our way to teach our group. (BTW – Curl San Diego members won the regional title and will be competing in the Nationals, so we have excellent teachers.) He shows us how to push off and launch the stones, using a broom to help with balance. We are supposed to start low, then butts up as we push off into a lunge position and release the stone in a 10 to 12 twist towards the direction of the skip. Okay, no problem right. 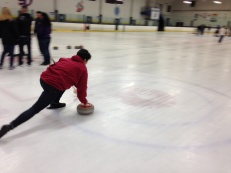 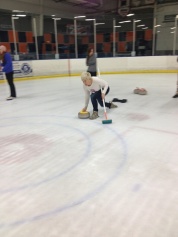 The problem with learning something in a step one, then two, then three method is you over think each part when it should be a smooth fluid motion. I concentrate too much, while trying not to aggravate my healing ankle, so my push off really was a push off to nowhere. I then try pushing off from my left foot. That’s worse as I still try to use my right foot and I really look uncoordinated. (My kids get their sports abilities from their dad.) Holy crap, curling looks so easy on TV. The boys were much better at it, as they tried to be creative with their final poses. 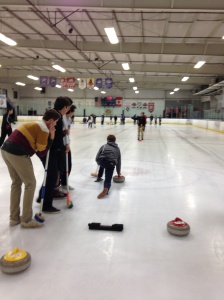 Let’s just go on to sweeping shall we. After the launch of the stone, there is a sweeper on each side that rubs the brooms on the ice to create friction and move the stone towards the desired target, whether towards the bullseye or to push an opponents stone’s away. Again much harder than it looks. First of all, I don’t sweep that fast (if I ever sweep at all), and depending on the speed of the stone, you may have to sweep super super fast, or it’s going too fast and you just watch it fly away. I think Lacy almost knocked some people over. The skip (the guy standing in the house giving directions) can also help sweep the stone towards the target. The circles around the bullseye area is called the house, and you want your stones to end up there in order to get points. 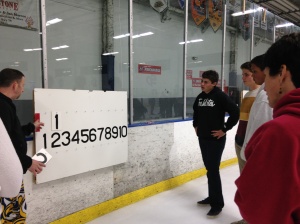 Oh the point system. I pick up on this part fairly easily, so I designate myself the official scorekeeper – I can do that. So there are a total of eight stones launched per team for each period or end, and each game consists of a total of 10 ends. (Our baseball-centric group referred to them as innings.) The closest team to the bullseye in the house gets the points for that end. The winner of that end can get one, two or even five points, but the losing team will get nothing. Losers. The total number of points is the center row, and the number of the end played is placed on your team’s row above/below your teams total points. Does that make sense? Okay, well, it’s a little funky (remember Scots invented this game in the 15th century and they were probably determining rules over a pint of ale). On TV they use a baseball type looking scoreboard so it’s easier to follow. 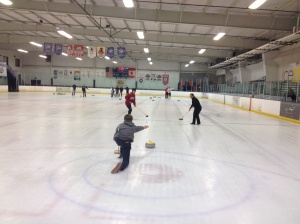 We’ve learned and practiced the basics, so it’s time to scrimmage. You should see how the boys faces light up when there’s mention of a competition. You can put these boys together in the backyard with a branch and wads of paper and they would make up a game in a few minutes, plus put together a full bracketed tournament in no time. These boys were born with a strong competitive gene.

We all “try” and take our turns. We lose the first end, the opposing team gets one point. Okay, the boys somewhat take over, determining who is better at launching, sweeping, skipping, or general coaching on the sidelines. They have also decided that us ladies are not that good. I take pictures, Heidi skips, and Lacy gets a hot drink from the snack bar and cheers on from the bleachers.

The next end, our team wins. We are now tied 1-1. There is time for one more end, so this will determine the winner. The boys totally take over, huddling in a group to discuss strategy. Jacob and Nick are best at launching; Grant, Jason at sweeping; Ricky at skipping. Grant does sweep at home sometimes. Our team launches an early stone in the house somewhat close to the bullseye, so the other team needs to knock ours out or get one closer. After each team launches 7 stones, it comes down to the last opposing teams stone. They had an earlier one get close, but not close enough. Since they have the hammer (like in football, the coin toss determines who gets last possession), they launch their final stone…and it’s so close…their instructor acts as skipper and sweeps it along (hey, is that cheating)…and it stops. Short by that much. 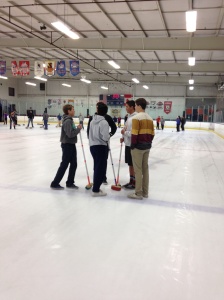 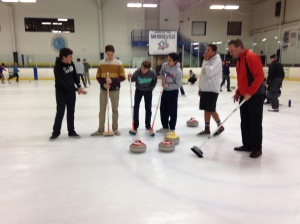 You would have thought the boys won the World Series, they were so happy, jumping up and down, high fiving each other. After quick handshakes with the other team (who all looked like they were in their 20s), they immediately slid down to where the scoreboard was located and took a group selfie. Boys. All I’m going to ask is…are there college scholarships for curling?

Well, that was harder than what I thought. I was so worried about weight on my ankle, I have a nice big blue and purple bruise on my knee instead. It was fun though, and I would like to play again once my ankle is back to normal. I know I could do better. There’s a lot of strategy involved once you get the basics down. It’s almost like chess on ice. What I have learned for next time is to wear thicker soled shoes for one. We all wore Vans, and the moisture from the ice froze our feet. I couldn’t feel my feet on the drive home and didn’t realize I was only driving 50 mph on the freeway until I was wondering why everyone was passing me by so fast. Also, make sure to stretch beforehand, sometimes certain limbs went one way when you’re trying to have them go another way, and next thing you know, you’re doing splits. Stretch the arms too, because sweeping that fast is not normal, at least not at my house.

We all had fun, and us moms loved watching the joy and enthusiasm in the boys faces. And although we teach them good sportsmanship and that you still learn lessons form losing, come on, you have to admit, you like your kids to win, even in a scrimmage game against beginner adults. For their next time curling, us parents should find them some funky team pants too.

As a parent, you enjoy watching your children experience the joy of discovery. And as an adult I’m also still learning about and discovering new things. I hope by going through this 50 weeks to 50 journey of mine, I become a role model for my kids to continually discover new things throughout life. I keep a post-it by my desk of the following motto, which I strive to live by: learn something everyday.

I’m a quarter of the way through my 50 Weeks to 50 journey…so much more to come.

Curl San Diego, www.curlsandiego.org. They are a non-profit group that promotes the sport of curling and offers Learn to Curl sessions ($25), open houses, pick-up games, and league play.