“I would have figured it out Bitch,” was the last thing Kiki said to me. I was explaining to Kiki, our waitress and performer, how we were splitting the bill at the Lips Sunday Gospel Brunch. I should mention that Kiki is one of the drag queens. Yes, I finally went to a drag queen show…and can’t wait to return.

Kiki was the one with attitude, and our table of four — me, Marie, Lynn, and Lisa-Marie — got used to being called bitches early on. I will admit, if we needed anything, we looked for the nice young guys wearing the black Lips t-shirts. Kiki scared us.

Overall, if you ever plan on going to Lips, you can’t be thin-skinned. Everyone, every age (old, young), every race (Mexicans, Filipinos), every skin color (white, black), every gender (straights, gays) will get picked on…and nobody cares. Our emcee, the “pregnant” Sister Nun of the Above, is a quick-witted queen who will single out anyone, and brings with her (I will refer to the queens in the feminine) sister act a funny, and clever angle where you really don’t feel offended at all. Her accents of various groups were accurately hilarious.

I’m sure I’m offending someone reading this, but oh well. Let’s see, what were some of the lines…ah yes…remembering to SlapAHoe, that afterwards the guys were welcome to meet in the parking lot to pray on their knees and to bring a kneepad (I’m not sure what that’s alluding to), and being located on El Cajon Blvd. that the gospel brunch crowd was the most righteous group around. There were a lot more great one-liners, but I can’t remember them all now, you just have to experience it all for yourself, and what an experience!

The show highlights the queens lip-syncing to various songs (I was hoping they actually sang), performing on stage, dancing around the crowd, and sometimes doing a few acrobatic movements. They certainly all had a lot of energy, and kept the audience entertained and engaged. It was fun, and it was good to laugh.

Sister Nun of the Above likes to start out each performance with calling forth the attention of all the brothers and sisters, praising aloud amens and hallelujahs! And she gets everyone in the mindset to have your dollar bills handy (like a strip club I presume), which the audience throws to the queens on stage, like throwing a baseball (my pitches weren’t as accurate as my sons). 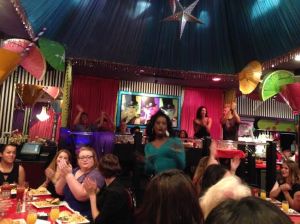 I did find myself looking at the queens and wondering…can those breasts be real? What do they do with their penises? Strap them down? (In my mind I used different terms.) A friend told me maybe I should take a look. Hmmm.

We were there for gospel brunch, and although we didn’t really go there for the food, our choices were very delicious. I decided to play it safe and get a fruit plate (we were being a little fruity anyway) and a side of bacon — what a combo right! The fruit plate was a platter’s worth, and very fresh and delicious. And my side of bacon was a package’s worth, enough for the whole table and perfectly crispy. With brunch, you also get unlimited Mimosas and Bloody Mary’s. I’m a Mimosa gal, and boy were those young attendants good about refilling your glass – it was like magic, my glass was always full. I am a half-full, rather than half-empty gal. Good thing Marie was our designated driver. Then you can come to Jesus with a shot of Jesus Juice. Not sure what was in it, some sort of vodka with something that made it taste like cough syrup. That did it for me. Reminder to self: do not mix drinks. 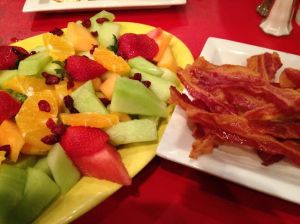 One of the best parts of the show was when Sister Nun of the Above turns herself into Cher, still pregnant though. Loved all of the performers. And you can tell that the packed audience was thoroughly enjoying themselves. Go in a group, and have it around someone’s birthday so they can get pulled onto the stage. That day, there was a nice young gay couple who just got married that were called up on stage to perform some drinking maneuver on their knees (what’s this knee thing all about?), and Cher was commenting on who she thought was the dominant partner.

The crowd is primarily adults, of all ages. Underage kids are allowed too, and I think that if you have kids that are pretty open-minded (your kids do know about different gender groups right, whether you agree with it or not), it would be funny for them too. They probably get all the sexual innuendo better than we do anyway. Plus they will like the music.

I always think about why do we love comedy. Is it because comedians can say things that the rest of us really can’t say aloud in a day-to-day setting? I mean, if we said half the things we thought, honestly, what would people think of us? Racist, insincere, bitch. Now if a straight person was up on that stage making fun of gays, would we laugh? It always seems to be okay when we make fun of our own group, but if someone else does, well, then they’re being offensive. Is that a double standard, and being hypocritical? Think about that.

And why do we have to label people in the first place. Why is it a special thing to go watch a show of drag queens? Can’t it just be a funny musical show, with food thrown in? I don’t know. But I still played into the idea that it was a special to-do by having Lips on my 50 Weeks list.

One of the lines Sister Nun of the Above mentioned was that all the white folk should look to the colored folk for the rhythm when clapping along to the beat of the songs. Because we all know that, especially white guys, don’t have rhythm. For some reason this made me think of my childhood friend Scott. Scott was good looking, had great hair, dressed well, was white, and boy could he dance. I always thought he was the perfect guy. Then, after taking him to my Sadie Hawkins dance, he revealed to me that he was gay. I was so disappointed, not in him, but I thought he would eventually be my guy. We had lost touch over the years, but I just was able to find him on Facebook – gotta love Facebook. Not sure why I went there, but in that you can’t label everyone. Okay sure I should have seen the signs that Scott was gay, but he’s a white guy that can dance, well yes, he’s gay, oh nevermind.

I think my bottom line here is go have some fun, and not take everything so seriously.