I became aware of the Walking Dead show a few months ago and watched some episodes. But that was the fourth season and was told I really should watch from the beginning. Watching four seasons of life after a zombie apocalypse wasn’t too appealing at the time so I didn’t. The show haunted me again when soon thereafter, my friend Marie B. sent sent me a link about The Watching Dead Escape (TWDE) and that it may be something we may want to do. Why not? Who wouldn’t want to dress up like zombies and try to infect good paying people with the virus? Sounds like fun to me!

Since TWDE was during Comic Con, we thought we could get some of the kids to participate — no go. Guess it’s not cool to dress up like a zombie with your mom. Oh well, so Marie, my friend Jamie, and I got into our zombie mindset this past Saturday night. Prior to going, we make sure to wear old clothing that we don’t mind getting dirtied up. I find old sweats, a surgical shirt and a medical smock (probably remains from a prior Halloween costume).

We drive to Old Town where we plan to catch the trolley since we know it’s going to be packed downtown. Once we finished driving around to find a parking spot, we rush to make the next trolley as we are already running late. We’re supposed to be there two hours prior to our walking time of 9:00 pm, so that TWDE folks can apply the zombie make-up. Now, you know Comic Con is in town when a ton of people dressed up in various costumes from superheroes to sexy vixens get on the trolley and no one bats an eye. I still can’t figure out how some of those women are comfortable walking around in 6-inch heels. I would fall over and sprain an ankle or two. 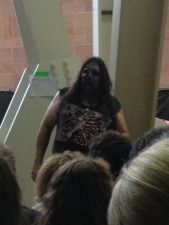 Once off the trolley, we rush to Petco Park to check-in. It’s pretty organized, you first sit to wait for instructions. Then you get up and move to sit in another section while the main zombie dude gives you a quick training session on how to be a zombie. He reiterates over and over again that you are to always remain in character (because people pay to be spectators, so we are always being watched by someone), and zombies are slow and lethargic…slow and lethargic…slow and lethargic…I am  s l o w  and  l e t h a r g i c. We are not to hide and scare people (what, that’s fun), or try to attack them outright. As zombies, our muscles go into atrophy and we really can’t see. So we are to slowly, and lethargically walk with our shoulders and eyes downward. We can hear noises, and smell survivors within two arms length distance. That’s how we can “infect” the survivors (the people paying more good money to run the course). Remember, slow and lethargic. We can do that, I think. 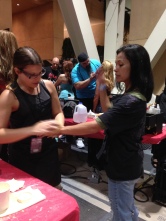 On to make-up, the fun part. We get into different assembly lines of make-up artists from the actual show. Artists from either Los Angeles or Atlanta who get paid to turn people into zombies, now that’s a profession! First make-up base is sponged on our hands and faces to pale us down, then a splattering of black and red (a trick we will have to remember). Then we’re air sprayed more white or black coloring on our faces and arms, which smelled like it had a trace of rubbing alcohol. Last came the thick and sticky fake blood made with corn syrup splattered all over my face to look like we had been eating flesh. Jamie had her guy make it look like she had a head wound. Marie and I wanted more blood — we are blood thirsty B8#@*%? — we go back in line for more blood, which was why I wore a white smock in the first place, so the blood would be very visible. The make-up artist does just that this time, smearing blood all over me, which eventually ends up in places I didn’t imagine. I asked for more blood, and I sure did get it. 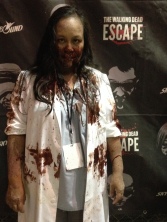 Now we wait in the holding area until our time slot. As I look around, we have an interesting group of zombies standing around doing nothing. I guess we are getting into character. There were people of all ages, yet skewed to those in their 20s or 30s. A few young children too. Many were dressed up to fit in with the Comic Con crowd. So you got your zombies wearing pajamas, orange prison wear, sailor zombies, bride zombie, zombie superheroes, and the FEMA guy — oh wait, he’s one of the course characters. This is when we take most of our pictures, because once we’re let out to infect survivors, we can’t be walking around with our iPhone cameras snapping away. Next year — GoPro. Remember, slow and lethargic. 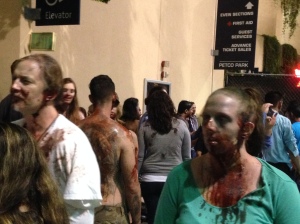 The time has arrived for us zombies to greet the waves of survivors! We are assigned to a group upstairs in a section where a horde of zombies await the survivors as they turn a corner. We end up liking this zombie section because we can make comments to each other in low zombie voices as we slowly and lethargically drag ourselves around. But as we start our zombieing, it’s hard to infect anyone. These survivors run you down, I mean really run you down as if they really are going to get infected by you. I think Jamie was struck to the ground three times! I know I was hit quite a bit, but I admit I really tried to block them too. And when I try to reach out, I realize the location of my hands may not be the best area to grab people. I mean I didn’t want to be accused of sexually harassing anyone. But we soon get into the zombie mindset of wandering around aimlessly until we hear steps or they get close enough to smell. There’s usually someone that will make noise as a distraction for the group, so us zombies mob towards the direction of the noise while the other survivors move quietly around us. So nice of them to sacrifice themselves. Our group was able to trap one guy in a corner, he just sat hunched down on the ground not moving a bit. Eventually us zombies forgot about him and he quietly slipped that away. Remember that if you get overwhelmed by zombies in the future.

Some zombies really get into character, making grunting noises, falling due to our failing muscles. Sometimes we bump into each other like a slam dance. The spectators try to tell the survivors which way  to go, or yell out to us that we could have gotten them. TWDE hecklers, who would have thought. Hey, we’re all trying here, give us a break, we paid even more good money to walk around slowly and lethargically. 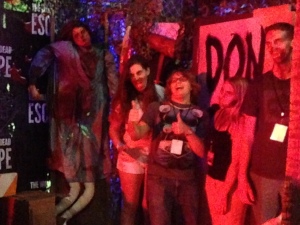 After about an hour though (we have an hour and a half total walking slot), we decided to go rogue. I mean, us three were getting antsy, we’re very active women here. We find out that we can walk the rest of the course as long as we stay in character, so we decide to slowly and lethargically see what the survivors have to do. Well, everyone is in total character around here, the actors really get on the survivors to move it. There are all kinds of obstacles set up throughout half of the ballpark. And we only saw a part of it, there was so much more (see YouTube links at the end), and it looks like the survivors need to be somewhat fit (note to self – train for next year). We find the end, and the military group manning the area there was very nice to us, taking pics, and letting us experience the finale. They were a family of volunteers, which is another option to get involved with TWDE, but volunteer slots fill up quickly.

As the survivors young and old are herded into the safe zone, I’m sure they felt relief that they weren’t infected. A fun time for all. 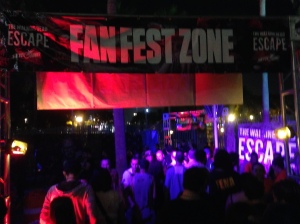 TWDE is just plain fun. Another chance to reinvent yourselves in a minor way playing dress-up. We’re all kids at heart and love to play. Would we do it again? Absolutely! While we were zombieing around, we kept getting ideas on what to do for next year. First, we would be survivors too and participate both ways. We would wear wigs, so we don’t get all that sticky blood goop in our hair and waste all that water showering at 2:00 in the morning. Oh, and we had all kinds of ideas on fun, freaky costumes to wear. It’s still in the planning stages, so I won’t share all our secrets yet. Yup, I admit it’s kind of a nerdy thing to do, but hey nerds rule the world, and we are looking for world domination! 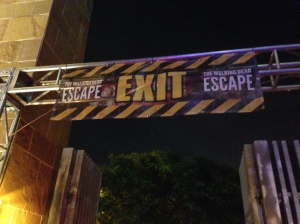 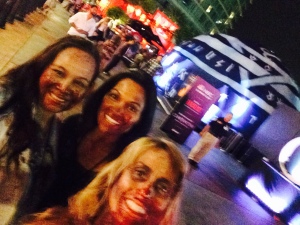 Walking around like a zombie was somewhat a form of meditation. No really. Think about it — you’re walking around in a somewhat vegetative state, slowly and lethargically aimlessly meandering about. Thinking and doing nothing is, well, relaxing. I think I will include zombieing in my daily routine…where can I fit that in my schedule?

As we were discussing meditation on our way to the Gaslamp, some guy overhears and starts talking to us, asking what we were doing dressed up as zombies. It becomes a familiar question the rest of the night, as we make our way through the late evening Comic Con crowd for some midnight breakfast. Even in this setting, three petite female zombies is a sight to behold. We were sitting at the outdoor bar at Ascension (MaryJane’s at Hard Rock, SyFy channel takes it over for Comic Con) where there’s a glass partition separating you from the sidewalk. While devouring breakfast food (there’s only so much human flesh you can take), people kept walking by, pointing and smiling at us. 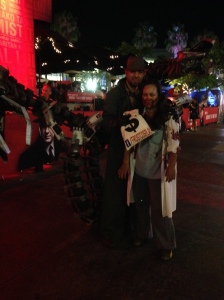 We also had a great time people watching, I mean it’s Comic Con, who needs a ticket, just grab a seat and watch. We see Mario Bros., octopus like creatures, more superheroes, Luche Libre type guys, some young construction guy that wanted us to stay and have a drink (we are not cougars), and a line of prostitutes, oh wait they were real ones. There were celebrity sightings too, Orlando Bloom went by us, supposedly Megan Fox was in the place, and Christopher Nolan (starring in Interstellar with Matthew McConaughey) was signing autographs right in front of us. We should have shoved a piece of paper over the glass wall for an autograph..

On the trolley ride home, you would have thought that superheroes and zombies are normal late night passengers. Me, I was happy to go home and wash all the blood and make-up off of me, because it’s really hard to pee when the toilet paper is sticking to your corn syrupy bloody hands. 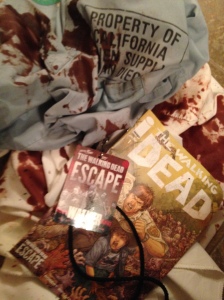 Maybe I should watch all the Walking Dead episodes now, it’s on Netflix right?

The Walking Dead Escape, http://www.thewalkingdeadescape.com/, $20 to be a spectator, $75 survivor, $95 walker, $150 VIP – survivor and walker. (We were able to find a Living Social deal to be a walker for $42.) Tickets did sell out, so if you plan to do it next year, you may not want to wait for a deal and just buy a ticket. The next TWDE is scheduled for October 25 in Miami, and other cities to be determined. But remember TWDE for next year’s Comic Con weekend, as we will walk again! 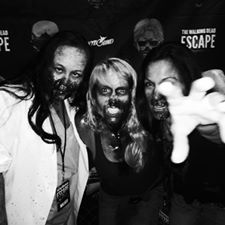 2 thoughts on “Week 34: Walking Amongst the Dead”