No, that’s not what she said. I’m talking about the Dam, you know the Hoover Dam. It’s that big man made thing that helps save water and creates power for places like…Southern California.

You know how there are those places that you always say to yourself, ok next time we visit so and so we’ll go there. Well, everytime I visit Las Vegas I tell myself that the Hoover Dam should be on the agenda. This past week, I made sure I did. Visiting the Hoover Dam was on my 50 Weeks to 50 list, and darn it, I was going to visit the damn Dam!

I was in Vegas for business, no really, for the week. My parents had tagged along too. We decided to stay an extra day and take the time to visit the Dam, which was only about 30 minutes away. And if you’ve ever ventured away from the Las Vegas Strip, the rest of the area is well like…most other communities — new housing developments arising, strip malls, baseball fields, freeways. You know you are close by the Dam when you exit off the freeway and Dam tourist souvenir stores start to spring up. And the streets are lined with fast food establishments. I was tempted to stop by the A&W restaurant since we don’t have any in San Diego.

There’s a short curvy road you take from Boulder City to the Dam, and I notice that they have their own police station which looked to have a pretty large presence. I assume it’s to prevent anyone from causing major damage to the Dam, because that would be a major domestic terrorist attack. You then notice all the electrical poles, then you turn a corner and there’s the Dam.

We pay the $10 to park in the parking garage (where else are we supposed to park), and as we step outside our comfortable air-conditioned car, are immediately greeted by the dry, hot desert air. I don’t know how Vegas folks stand the heat. I guess you get use to it. We hurriedly get into an elevator (the theme of the visit) from the garage to the street level, so that we can take an escalator down to the Visitor Center and get back into someplace with air conditioning.

The longer Dam tour where you get to wear hard hats wasn’t available by the time we get there (I was in seminars all morning, so we arrived in the afternoon), and we have to settle for the shorter Dam Powerplant Tour, which lasts about 45 minutes including a short film documenting the water reclamation reasons for having a Dam, and building of the Dam itself. It was actually very interesting, and we learned that construction took five years, which was two years ahead of schedule, and it created Lake Mead, the largest man made lake in the U.S. They had to build smaller dams and diversion tunnels prior to the big Dam, one of the dams is still buried in the water. Being built during the Depression era, the project helped boost the economy too, and helped develop the surrounding communities. After the film, we are lined up to wait for a large elevator to take the whole group down, down into the Dam facilities. Each group is about 40-50 people, tours run constantly, so lots of people come to visit. I hear many dialects and foreign languages, so it’s a pretty popular Dam destination — being one of the top manmade wonders of the world.

Our tour guide is informative and funny. I think a pre-requisite must be a sense of humor if you want to work in this Dam place. As we are packed in like pickles in these elevators, our guide warns us that all those with cameras “can take all the Dam pictures you want.” Boy, people really like to play with that Dam word.

After the elevator takes us down 530 feet into the rock wall of Black Canyon, we exit into a tunnel that leads to a small glass enclosed room that overlooks a massive 30-foot-diameter pipe, which carries water from Lake Mead to the Dam hydroelectric generators. Apparently 90,000 gallons of water each second. Wow, that’s a lot of water surging underneath us. I’m thinking if there’s some major earthquake or fluke underground flash flood — we’re gone.

We also see some maps detailing the floor plans, showing that the two sides of the Dam facility are identical. Now, for some reason I never realized that the Nevada/Arizona border runs through the middle of the Dam. So they refer to the Dam Nevada side and the Dam Arizona side. We are then lined up one by one to head back into the elevator, and counted twice. I feel like I’m a kid on a field trip. 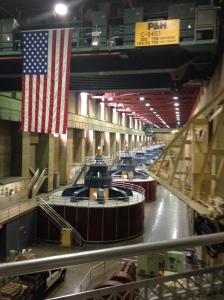 After a short elevator ride we walk through a longer tunnel to the viewing balcony overlooking the room housing the powerplant generators on the Dam Nevada side. You get a nice view of the 650-foot long room and its eight generators, each marked atop with the initial of the state the power is designated for. I love the design of the terrazzo floors, so art deco. After way too many Dam generator pictures, we are once again lined up along the long tunnel rock tunnel, counted twice, and wait for the elevator to arrive. We notice some water leaking down on some areas of the tunnel walls; there’s not going to be an outburst of water through a crack is there, I wonder. 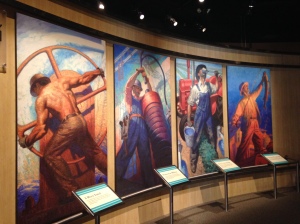 Once back in the elevator, we end the tour at the visitor center, which has a small but informative exhibit hall and an outdoor viewing area overlooking the Dam. Inside the exhibit hall, you learn many facts about construction and use of the Dam. The official death count of those who died during construction is 96, but that number doesn’t include deaths from pneumonia. And although the government says no bodies are buried there, you have to wonder due to the nature of some of those deaths, it’s a gruesome thought.

Up on the outdoor observation deck, you get a view of the Dam and its grand concrete wall. When they built the Dam, they had to pour smaller 5-foot square concrete blocks with a cooling pipe in the middle of each in order for the concrete to set — otherwise if they would have poured it all together, it would have taken 125 years for the Dam concrete to cool down. How different would our lives be without that innovation of a cooling pipe? 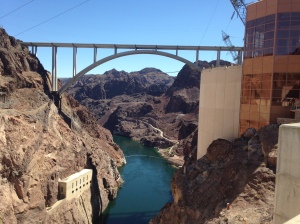 I took my share of Dam pictures, but I was so worried that I was going to drop my phone down the Dam side, I probably could have taken some with better angles. I would have been lost without my phone. My phone has become so damn important in my life. I wish there was some sort of contraption that holds my phone around my neck for these picture taking purposes — can someone design one for me please. I guess I can design one myself, and mass market and sell it too. I can go on Shark Tank. Okay, I’m getting off topic.

Let’s see, oh yes, you can then leave the visitor center and walk out on the Dam itself. You see the older visitor center and Dam towers. I love the art deco artwork on the structures. And I didn’t think about it until just now, but I should have taken a picture with my legs straddling the border of Arizona and Nevada — Dam it! And you can’t miss the bronzed Winged Figures of the Republic. Apparently if you rub the toes of the figures, it’s good luck. You do have to pay tribute to those who developed the idea for the Dam, constructed the Dam, and died at the Dam. If the Dam wasn’t built, how would the landscape look like in places like Southern California without the water and power. You don’t want to dwell on the “what ifs” but we can be thankful for the many pioneers before us.

When you think about it, many sacrifices have been made for us to have the lives we have today. In the 1930s, when the Dam was built, people were willing to take on such dangerous jobs because they were in the middle of the Depression and wanted a better life for their families. Even our ancestors sacrificed in coming to a new country in the first place. Whether from Europe, Africa, Asia, South America, they sacrificed to give us all better lives in the United States. Today there are also many occupations that sacrifice for the benefit of others — police, firemen, military, miners, and more — we can’t thank them enough.

Well, I’ve seen the Dam, and damn glad I did. Check that off the list. What I also didn’t think about until now, is that we could have taken Dam tours from the water. There are apparently lots of vendors that will provide your group with river and lake cruises, or rafting trips — next time. Then there’s helicopter tours too…ugh, I won’t go there. I will say that I’ve always thought that living in Vegas would be hard because of the heat. But the river and its surrounding communities aren’t that far away from Vegas and its jobs…